The history of the castle of Fleury-la -Forêt began in the sixteenth century. It is on the grounds of Fleury-la-Forêt, that Pierre de Courcol begins its construction in 1595.

In the seventeenth century, the castle passed into the hands of the Caumonts, when his granddaughter Roberte de Courcel gets married to Charles de Caumont. Unfortunately, in 1643, a fire destroyed a considerable part of the castle. During the restoration, a chapel of Our Lady was erected within the castle.

In 1698, the knight Jacques Dauger became the owner of the castle and began significant renovations, and taking care to keep the unity of the building. During the renovation, two wings and a main gate have been added to the castle.

The eighteenth and nineteenth centuries 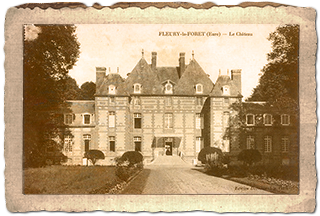 Occupied by the German army during World War II, the castle was uninhabited until 1978, the year of acquisition of the castle by the Caffin family, current owners, who made significant renovations. In 1993, the castle was classified as historical monument.

Immersing yourself in the castle of Fleury-la-Forêt from our virtual tour, and discover the charms and the history of the castle.